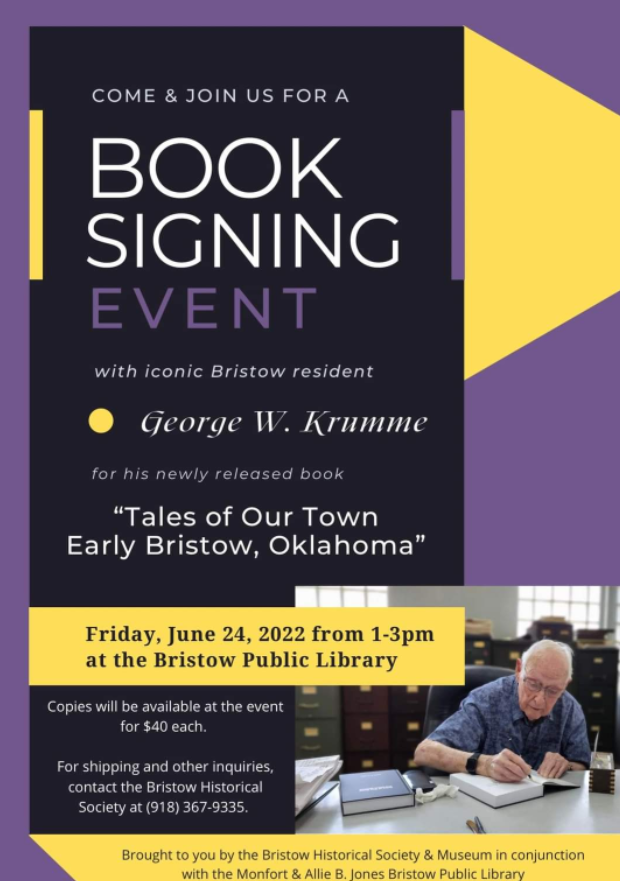 A book signing event is being held on Friday, June 24, 2022, for a local author, who happens to be 100 years young. Mr. George Krumme gives a historical account of his experiences in Tales of Our Town Early Bristow, Oklahoma.

Tales of Our Town Early Bristow, Oklahoma (Krumme, 2022) is on sale for $40.00 at the event or through the Bristow Historical Society.

How Ironic is it that Mr. Krumme is from the so-called Silent Generation and still putting his voice out to be heard? A generation that has seen the Great Depression of the 1930s and World War II in the early to mid-1940s, most of those who fought during the Korean War, is the Generation that is noted as forming the leadership of the Civil rights movement as well as creating the rock and roll music of the 1950s and 1960s. Coined the Silent Generation, because those born during those years were raised during a period of war and economic depression. Mr. Krumme certainly made the most of his opportunities.

Mr. Krumme is in the Tulsa Historical Society’s Hall of Fame for good reason, not just for his dapper looks and joyful company. He’s been active from early childhood until today using his voice and courage to help Oklahomans. According to information from friends and the Tulsa Historical Society, the author finished high school at age 16 in Bristow and then attended Oklahoma A&M as a music major, he chose to then study weather forecasting at Spartan School of Aeronautics, then taught aviation to cadets in Texas. Mr. Krumme enlisted in the Army Air Corps and received training in mathematics and physics at Pomona College in Claremont, California. Reassignment to the infantry led him to Europe during the Battle of the Bulge and he was awarded a Purple Heart. After the war, he returned to Pomona to earn a bachelor’s degree and was named to Phi Beta Kappa. After graduation, he returned to Bristow, joining his family as a partner in Krumme Oil Company. He’s an oilman who has his master’s degree in petroleum engineering and Ph.D. in earth science. He was active in Democratic politics for a half-century and served as a National Committeeman from 1976–1996. I hope there is a secret to his success somewhere within the pages of his new book.

The Bristow Historical Society has more information about how to purchase a copy of the book outside of the book signing. 100% of the proceeds go to the Route 66 Renovation fund to preserve and restore four Bristow, Oklahoma landmarks- the depot, the Chrysler Tower, the Frisco water tower beside the depot, and Town Square. Your $40 donation will purchase this book and they can mail it for an additional fee. (918) 367-9335 1 Rail Road Place, Bristow, OK 74010