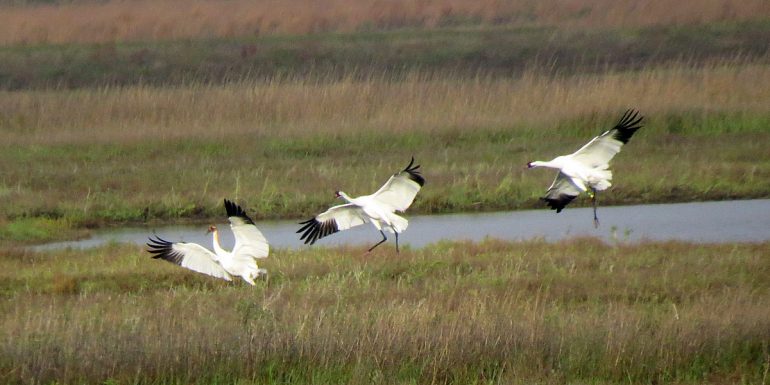 Last winter, an estimated 543 whooping cranes arrived on their Texas wintering grounds after migrating 2,500 miles from their breeding grounds in Wood Buffalo National Park in Canada.  Each fall the birds make their way back to Aransas National Wildlife Refuge and surrounding habitats, where they spend the winter.  Once they have arrived, wildlife biologists with the U.S. Fish and Wildlife Service (Service) survey the birds by air and analyze population trends.

“It is exciting to see another record year as whooping cranes continue to increase in number and expand their winter range,” said Wade Harrell, the Service’s Whooping Crane Recovery Coordinator. “Next year, we will be adding the South San Jose Island and Heron Flats Secondary Survey areas to our Primary Survey area given we detected enough whooping crane groups there to meet our protocol for inclusion. Conserving additional winter habitat for the species will be a key component of future recovery efforts.”

Preliminary data analysis of aerial surveys of the Aransas-Wood Buffalo whooping crane population conducted last winter indicated 543 whooping cranes, including 31 juveniles, in the primary survey area (approximately 160,125 acres) centered on Aransas National Wildlife Refuge near Austwell, Texas. This is an increase with the last survey from winter 2019-2020 estimating 506 whooping cranes, indicating the population has grown over the last two years.

An additional 38 birds were recorded outside the primary survey area during the survey, which is also a record high. This marks the fifth year that the population has topped the 500 mark, although a survey was not conducted during winter 2020-2021 due to COVID-19 concerns.

Harrell said biologists plan to conduct the next survey in January 2023.

Whooping cranes are one of the rarest birds in North America and are highly endangered. Cranes have been documented to live more than 30 years in the wild. Adults generally reach reproductive age at four or five years, and then lay two eggs, usually rearing only one chick.

View the original transcript on the Official U.S. Fish And Wildlife Service Website.