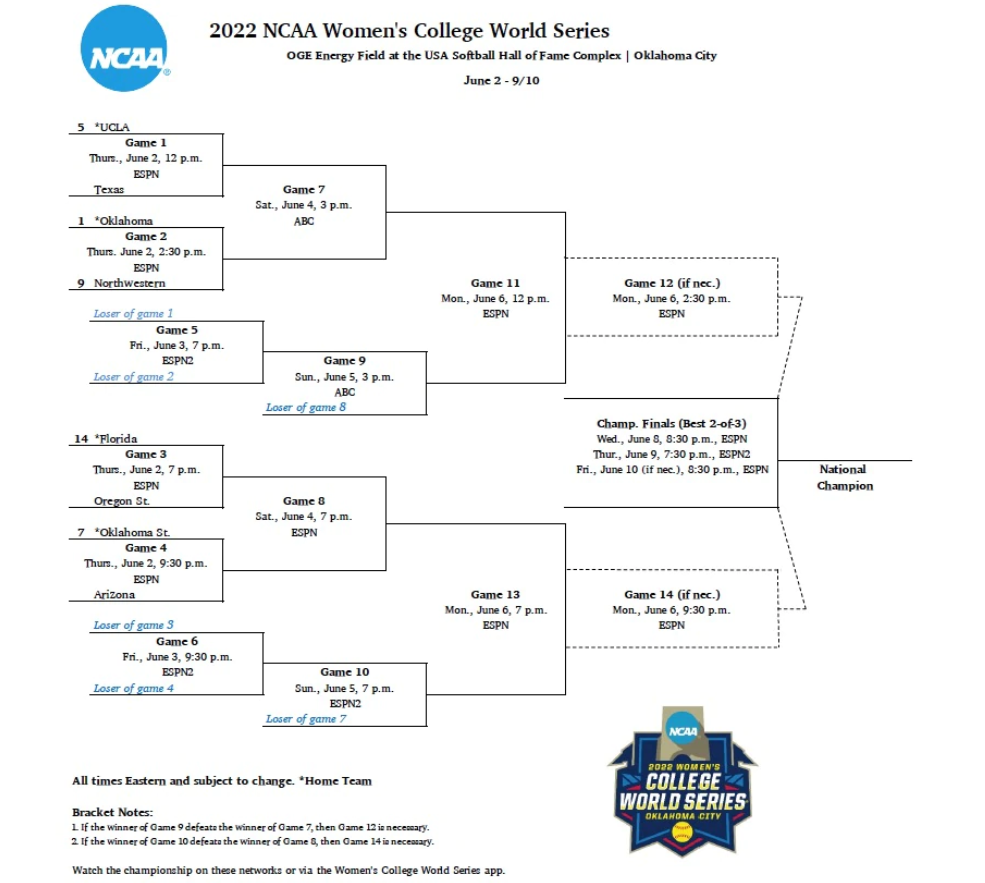 USA Hall of Fame Stadium in Oklahoma City will host the granddaddy of college softball this weekend as eight teams will fight for college softball royalty and the right to call themselves national champions.

The Sooners (54-2) are the title favorites out of the Big 12 and have been the best program in college softball for the last five years.

They have won three out of the last five titles and have been to OKC six years in a row. Head coach Patty Gasso has built a juggernaut and will look to defend her throne this weekend.

The Sooners won their regional and super-regional against UCF with ease and will try to defend their title at OKC.

Oklahoma is led by back-to-back Player of the Year and NCAA career home run leader Jocelyn Alo and breakout Freshman of the Year Jordy Bahl, who is expected to be back after missing a month.

The Cowgirls (46-12) are making their third straight trip to OKC and have been a powerhouse the last three years out of the Big 12.

They are one of the two teams that beat Oklahoma this year and have shown that they are not afraid of anyone and can beat anybody in the country.

OSU has had their season ended in OKC the last two years, and the only way they will be satisfied at the end of this season is if they are raising the trophy.

After legendary Mike Candrea retired and seven seniors, including home run hitter Jessie Harper everyone expected Arizona to have a down year. They were right for most of the season. The Wildcats were up and down all year and struggled in conference play finishing 8-16 overall.

Arizona proved they belonged when they went to Missouri and upset them in their regional and then went to Mississippi State and beat them in a super-regional to make it to the WCWS series and prove all the doubters wrong.

At the plate, Arizona is led by speedy Jasmine Perezchica, who leads the team in batting average, and Allie Skaggs, who is their home run leader.

Florida won their regional and then upset number three seed Virginia Tech to advance to the WCWS and are looking to win their first title since 2015.

At the plate, Florida is led by superstar Alabama transfer Skylar Wallace who leads the team in batting average, runs scored, OPS, and slugging percentage. She has postseason experience, and if Florida wins it all, she will be a big reason.

The Wildcats (45-11) are the first matchup for Oklahoma. They reside in the Big 10 and are making their third appearance in OKC under coaches Kate and Caryl Drohan and first since 2007. Former Sooner Graduate Michelle Gascoigne is also on the staff.

They are known as “the cardiac cats” around the country because of the close games they have been in and the number of comebacks they have completed.

They won their regional and then beat Arizona State in a grueling three-game super regional where they were down 5-0 and had to battle their way back.

The Wildcats are led by superstar pitcher Danielle Williams who has been a workhorse since she stepped foot on campus, and if the Wildcats want any chance to beat OU, she will have to find a way to stop the record setting sooner offense.

The Beavers (39-20) come out of the Pac 12, known for the last couple of years as the toughest conference in softball. This is only the second appearance in program history for Oregon State.

No one expected the Beavers to be in Oklahoma City at any point this season. It was not looking good heading into the postseason after a ten-game losing streak and getting swept three straight times in April.

Oregon State is led by all-American pitcher Mariah Mazon who will try to shut down the Florida Gators in their first-round matchup.

The Longhorns (43-19-1) are making their first trip since 2013 and are the last Big 12 teams in the field of eight fighting for the title. They are also one of only two teams that beat the reigning champions and title favorites Oklahoma.

The Longhorns were unseeded coming into the postseason, so they had to travel to 13 seed Washington and win that regional, then travel to 4 seed Arkansas and beat them twice. After losing the first game in supers, they bounced back to win two in a row and punch their ticket to OKC.

Texas is led by the spark plug and four-time all-American Janae Jefferson, who does it all for them. She is the career leader in batting average and hits at Texas. If Texas wants to make a big run, it will be on the back of Jefferson.

UCLA (48-8) is one of the most dominant programs in college softball history and is making its seventh straight trip to the WCWS. The Bruins lead the nation with 12 NCAA championships and have been a college softball staple.

The Bruins lost one of the greatest players of all-time last year in Rachel Garcia, who played her final game against Oklahoma in the WCWS the previous year.

After losing a lot from last year and then losing Aaliyah Jordan for the rest of the season in a game against Texas early in the year, it looked like UCLA might not make it to OKC, but they proved everyone wrong and made it back again.

They are led by all-Americans Delanie Wisz, who leads the team offensively, and shutdown pitcher Megan Faraimo.

The tournament is double-elimination until the last two teams are standing, and they will battle it out in a winner-take-all best-of-three series. The first game will kick off on June 2nd at 11:00 pm central time, and the championship series will begin on June 8th.

For more information on the Women’s College World Series, you can visit the NCAA website.

Here is the schedule, scores, TV networks, and updated softball bracket for the 2022 Women’s College World Series in Oklahoma City.

The eight teams in the WCWS this season are Arizona, Florida, Northwestern, Oklahoma, Oklahoma State, Oregon State, Texas, and UCLA.

2022 Women’s College World Series schedule, TV networks, scores
Click or tap on the links below to open live scores in a new window or tab.

All times are Eastern. Times and TV networks are subject to change.