Dougherty Letter To The Editor: Calling On The Good Guys 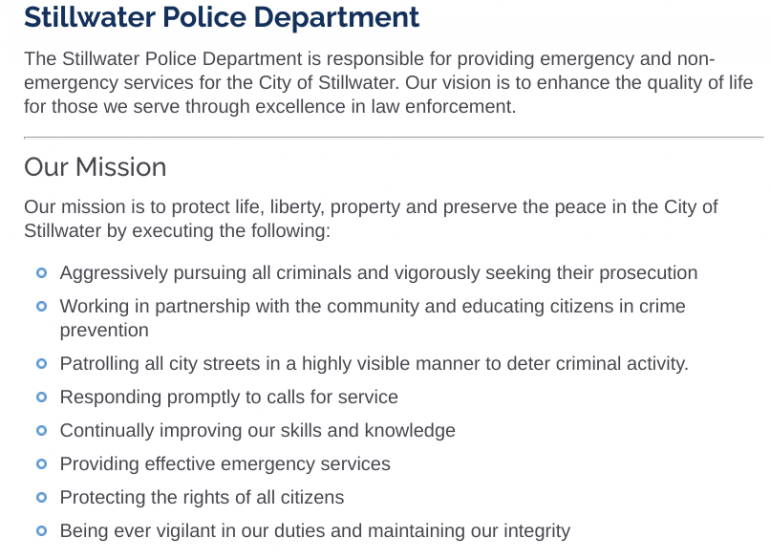 To the Editor and all Stillwater residents

WE ARE BETTER THAN THIS

I have had the opportunity to meet with Stillwater Mayor Will Joyce and multiple Stillwater management officials over the last couple of years. We have had hours of recorded conversations and numerous email exchanges discussing the growing number of reports of discriminatory and biased policing that is happening from a small minority of our police officers in the Stillwater Police Department. We have discussed the fact that reports of assault, intimidation, threats, frivolous traffic citations, etc have been used by these few police officers to silence and harass victims. We have also discussed that these few police officers have used discriminatory and biased decision-making in choosing not to investigate or accept evidence in multiple OKDHS investigations regarding the abuse to as many as 7 small children. Stillwater Mayor Will Joyce is aware that Stillwater police Chief Jeff Watts stated on June 17, 2020 “in the 30 years, 29 years I have been here, we have never asked, to my knowledge, for an outside investigator to come in to do an internal affairs.” This week I received a notification that the City of Stillwater filed with the courts to notify me that they still have not had an independent investigation into any of these complaints and clearly are not going to.

Stillwater Mayor Will Joyce has allowed the expenditure of thousands of city tax dollars to make motions in court which will protect the right of these ill-intended officers to continue to police with bias and discrimination. Our Stillwater mayor is well aware that these practices continually leave the most vulnerable at risk. The majority of our Stillwater police officers are fantastic individuals with impeccable character, they do not need to be ‘compelled’ to the police or protect without discrimination. We have seen many examples this week of the outstanding service our police officers provide here in Stillwater.

I made multiple respectful emails to our Stillwater Mayor and council requesting that city, state, and federal policy be inforced to reduce discrimination and bias by these few officers. Our Stillwater mayor returned my requests by allowing Stillwater management to spend thousands of our tax dollars filing for a protective order against me. The protective order our mayor and council allowed to be filed against me stops me from communicating with my elected officials or having rights to open records in these matters. Therefore, I am reaching out to the public. WE ARE BETTER THAN THIS.

I concede that I am a lifelong Republican, a former city councilman, and a staunch supporter of law enforcement. But, I do not think this should be a political issue. Please use your voice to notify your mayor and council that this is unacceptable. The best way to let the vast majority of our outstanding police officers know that we appreciate them and respect them, is to keep those officers that shed a bad light on law enforcement accountable.

Thank you so much,
Darrell Dougherty

(Editor’s Note ): This story was originally submitted to Stillwater Newspress in January of 2022, at which time they chose not to run the open letter. Please encourage everyone to get registered and get out to vote. Please turn out Oklahoma! Please get excited! If not for yourself, then for our children!