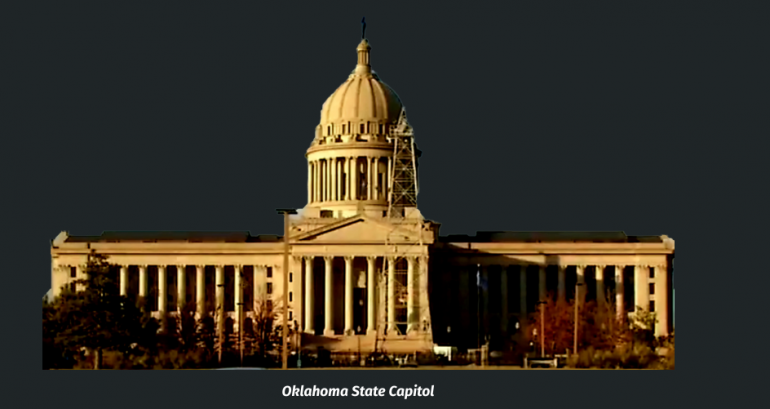 Letter To Editor: The RINO Governor of Oklahoma Is A Lame Duck

Kevin Stitt has two options. Well, actually he has three. He can stay in the race and run for re-election and be defeated in the GOP Primary on June 28th. He can just outright resign. The third option is the one which is recommended for him to gracefully just withdraw his name from contention and not seek another term as Governor of Oklahoma.

A RINO has a big horn to toot his own accomplishments. But the incumbent Governor fails to abide by the conservative principles stated in his own GOP Party Platform.

He practices cronyism, invites foreign companies to relocate and bring their warped foreign values with them, fails to address the growing CRT/DEI problem in schools, and grandstands to sign multiple anti-abortion bills that he does not enforce, and declares war upon indigenous Oklahomans.

The 39 Native American Nations whose lands are surrounded by the State of Oklahoma have become a deliberate target of Kevin Stitt. Totally dishonoring his own citizenship in Cherokee Nation, which was obtained by dubious means through one of his ancestors, he wastes the tax dollars of Oklahomans in ill-founded litigation which he consistently loses. Worse, he basically declares the tribes as the enemy rather than the good neighbors and hosts that they actually are.

Most recently, Kevin has alienated GOP Senators and Representatives in Oklahoma by having the audacity to veto a bill they overwhelmingly had passed to recognize convictions in tribal courts, thus proving that his so-called devotion to law and order and equal treatment was all a façade and a charade from the beginning. The Oklahoma State Senate and House of Representatives saw through this and realized that Governor Stitt is not only disrespecting the tribes, he is opposing the will of all Oklahomans through their elected representatives. They easily overrode his veto. Why does Kevin Stitt believe that he can unilaterally impose his will over others?

It is understandable why the RGA under normal circumstances would support one of their members. However, these are far from normal circumstances. When there is a RINO Governor who goes rogue and deliberately attempts to tear his state apart at the seams, his colleagues from other states have to recognize that they cannot betray the people of Oklahoma or of their own states by supporting an incumbent who betrays everything they themselves were elected upon. Those big bucks that the Republican Governors Association is putting into Kevin Stitt’s campaign fund are undermining their own credibility and could very well be redirected.

As Donald Trump ramps up his own campaign for re-election to a second non-consecutive term, he will enhance his own standing in Oklahoma and beyond by admitting he was misinformed about Kevin Stitt and therefore rescind any support or endorsement. He has done it before and this is another of those extraordinary circumstances where those closest to him need to get his ear immediately.

THE PEOPLE OF OKLAHOMA

The Republican Governors Association and President Donald Trump are not Oklahomans and really should not try to influence the people of Oklahoma who understand what is happening on the ground in their own state. Citizens of the Tribes are also Oklahomans and do have a valid stake in the outcome of this election. That’s why an objective and realistic analysis is imperative at this crucial time just one month before the primary elections.

We can’t conclude this brief look at the Oklahoma midterm elections without considering the donkey in the closet. I’m not going to say the elephant in the room because we know which party virtually all of the mainstream media prefer. Even the Talking Heads like Tucker Carlson at Fox News and others need to hear from the candidate who speaks for the people of Oklahoma, not just the one who bears the title of “Governor” temporarily. The newspapers, television and radio stations in Oklahoma also need to perk up and pay attention lest they be caught off-guard on June 28th.

This analysis is just a snapshot in time with fast-breaking events happening every day. The Swadley’s corruption debacle is probably just an iceberg in the frigid sea of Kevin Stitt’s frozen intellect. Undoubtedly, he will grow more insular, defensive and hostile as he is backed into a corner by his own malfeasance in the coming days.

I saved the best for last. Kevin Stitt is not the only option against having a Democrat Governor bring Joe Biden’s Distorted America into the Heart of Oklahoma. There is a naturopathic doctor and 24-year veteran of the Tulsa Police Department with experience leading the SWAT team who is a true leader.

It would behoove you to do your own research now so you don’t wake up on June 29th to find out that Dr. Mark Sherwood is the GOP nominee for Oklahoma Governor in 2022. He is already getting coverage by Newsweek. Do the people in Oklahoma want to be the last to find out?

A WORD TO KEVIN STITT

The best way you can prevent your legacy from going from bad to worse is to simply withdraw your name from this campaign. Finish out the rest of your one term and do as little harm as possible. It’s better than a humiliating defeat on June 28th.

(Editor’s Note ): David’s articles can also be found on his personal website.