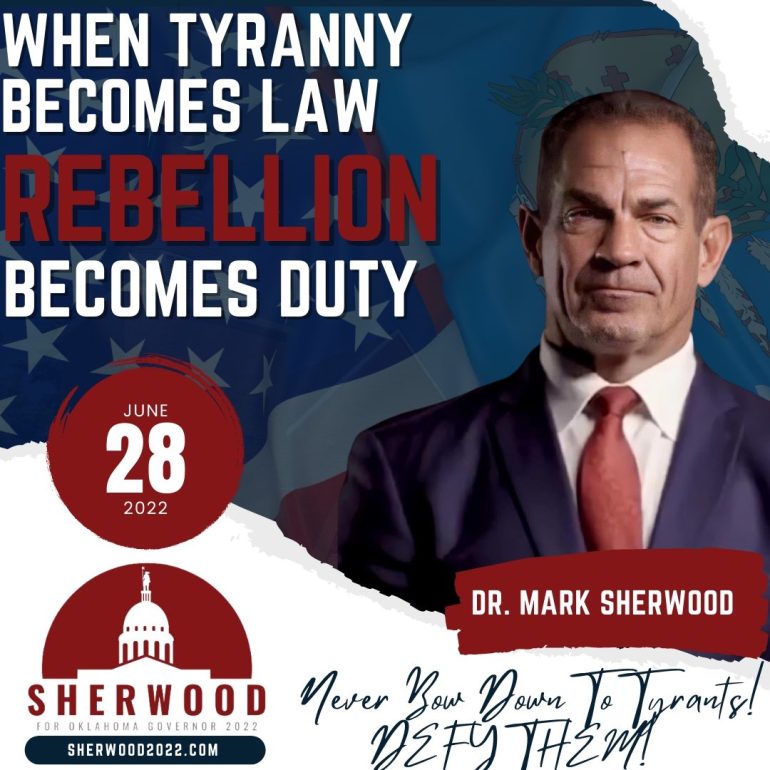 The State of Oklahoma and the United States of America are plagued by pseudo-conservatives. Joe Biden and his ultra-leftist federal government are aided and abetted by RINOs at every level.

Oklahoma has a unique opportunity this year to send two true conservatives to Washington DC as both of our U.S. Senate seats are up for election. But, the United States federal government did not create the states. It was the other way around. The states created the federal government and, under the 10th Amendment, Oklahoma and the other states are still the bedrock of our liberties.

The republic is truly saved on the local and state level.

That’s why Republicans who are not living up to their promises are being primaried all across the country. As a naturopathic doctor with a very successful practice in Tulsa, a political campaign was the last thing on my mind. But after four years of broken promises, severed relationships, and outright hostility by Kevin Stitt, I knew I had to step up and help set Oklahoma back on the right track.

As a 24-year veteran of the Tulsa Police Department, including 10 years on the SWAT Team, I’m concerned that the former mortgage broker in the State Capitol has too many shady arrangements with business cronies. 47 years ago, a former Oklahoma Governor wound up behind bars because he was convicted of soliciting a bribe while in office.

We need to make sure that we let OSBI carry through their current investigation without any hindrance. It’s the job of law enforcement to pursue the criminal case. We will discuss this in just a moment.

My concern is that the voters of Oklahoma must exercise the right and duty to scrutinize every candidate, including the incumbent, before giving them your precious vote.

While the Democrat Administration in our nation’s capital seems to be hell-bent on deliberately destroying America, the only reason they are succeeding is because Republicans are not standing up against them. Kevin Stitt talks a good fight. He blames Joe Biden for everything. Then he sends Oklahoma First Lady Sarah Stitt to kiss up to Jill Biden on the tarmac at Tulsa Airport.

I just want to bring some crucial issues to your attention today as you consider whom to vote for in the GOP Primary on June 28th. If you think this 2022 campaign is just between Kevin Stitt and a Democrat opponent in the general election, nothing could be further from the truth.

Your vote is not a rubber stamp!

If you are tired of Governor Stitt wasting your tax dollars through frivolous litigation, embarrassing Oklahoma before the United States Supreme Court with unfounded cases, you can stop that immediately. When Gov. Kevin Stitt and Lt. Gov. Matt Pinnell as Tourism Director terminated an agreement with several of Oklahoma’s tribes to operate Oklahoma Welcome Centers at minimal cost to the state, it appeared that this was just a matter of his pent-up emotions lashing out due to his failure to understand that the United States Constitution, Article 6 makes Treaties the Supreme Law of the Land.

Turning Oklahomans against one another seems to be Kevin Stitt’s mission in life.

No longer contracting with the Cherokee, Choctaw and Chickasaw Nations to operate the Oklahoma Welcome Centers just means more of your tax dollars will be spent instead of being contributed by the tribes as good hosts and neighbors. The reservations of these three tribes border on our neighboring states of Kansas, Missouri, Arkansas and Texas. It makes total sense for them to have a role in working hand-in-hand with the state of Oklahoma within their own sovereign domains.

But now, it is obvious that Kevin Stitt has more at play than just his animosity against our indigenous citizens.

The Oklahoma State Bureau of Investigation has begun looking into allegations that the Oklahoma Department of Tourism and Recreation may have made a sweetheart deal to operate concessions at state parks.

Our current governor is on record as having made the following statement:

“I’m going to look at every single different contract we have in the state, and I want to maximize it for the taxpayers.”

All power is now vested in the governor, relegating the tourism commission to nothing more than advisory status, thus making the governor virtually unaccountable for his decisions and actions. It now becomes clear that Kevin Stitt does not want the tribes involved in operating, or even cooperating in the function of, any state facilities because he does not want them to be privy to how he is wheeling and dealing.

If you are weary of Kevin Stitt favoring his friends at the expense of everyone else, you are ready for a change.

You definitely don’t want a Democrat who will just bring Biden’s agenda to Oklahoma. You have the opportunity to replace a corrupt governor and his inept administration with a real conservative who will live up to his ideals and fulfill all his promises.

There are many more issues at stake. Most Oklahomans believe in making abortion illegal, but that does no good if you have a governor who will not enforce that law or all the others that are already on the books. You need a leader who will defend your children and grandchildren against evil curricula in their schools.

You don’t need to wait for the completion of the OSBI investigation into the corruption within the current administration in Oklahoma City. You can stand up now and tell Kevin Stitt that you have found a better alternative who will give you reason to be proud of your home state as a leader among the states, not one of limited vision who has compromised any principles he may once have had if he ever had any at all.

That’s why I humbly ask for your vote for Mark Sherwood for Oklahoma Governor in the GOP Primary on June 28th, 2022.

This will be Kevin Stitt’s worst nightmare as his greedy political ambitions for wealth and power vanish in the whirlwind he has reaped. Oklahomans understand how to shelter against whirlwinds.

There will be no middle-of-the-night surprises in Oklahoma’s political climate.

If you’re tired of criminal investigations and litigation coming to mind whenever you think of the Governor of Oklahoma, Kevin Stitt is not your man! Please download my app, Sherwood 2022. If you honor me with your vote on June 28th, together we will make Oklahoma the most livable state in America!

I look forward to telling you more of my positive vision for Oklahoma in the weeks ahead. I am also very eager to hear from you and to receive your input into what you expect from me as your new governor.

My ears and eyes are always open. So is my door.

(Writing by Dr. Mark Sherwood; published by The Oklahoma Post)