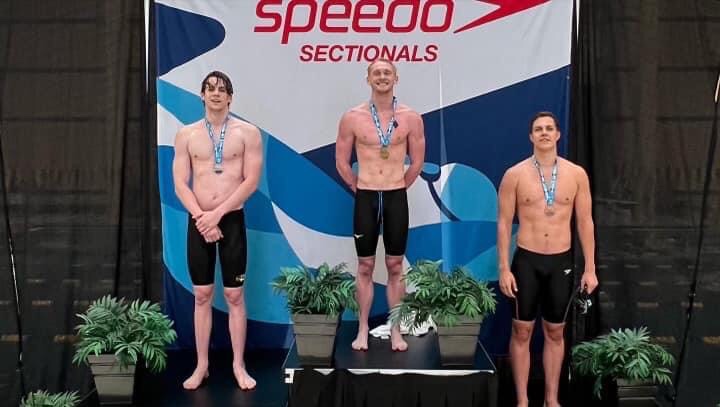 The weekend featured top-class swimming from some of America’s elite competitors at the U.S.A. Swimming Championship Series Sectionals (say that three times fast) sponsored by Speedo. The championships and time trials took place across the United States, including regionals in Ohio, Minnesota, Oregon, and North Carolina, and will continue through the summer months. USA Swimming is the national governing body for the sport of swimming in the United States and is responsible for selecting and training teams for international competitions, including the Olympic Games. This weekend’s highlighted competition was hosted by the Columbia Swim Club at the famed Mizzou Aquatic Center at the University of Missouri Student Recreation Complex in Columbia, Missouri.

An energetic crowd was on hand to witness several great Oklahoma athletes, which included the rising star of competitive swimming, Oklahoma’s own Aiden Hayes. The former Norman North Wolfpack student shined in each of his events, overcoming illness, injury, and the college freshman blues to get back on track for the Atlantic Coast Conference and upcoming NCAA season. An Olympic hopeful, Hayes is now a 19-year-old sophomore at North Carolina State and, prior to starting his collegiate career, was the 2021’s Male High School Swimmer of the Year for the 100 butterfly event.

NC State is one of the top swimming programs in the country known for producing numerous Olympians. Hayes was part of the NC State Wolfpack’s seventh ACC title in the last eight years. He took home a bronze medal in the 200-yard butterfly with a time of 1:40.39 and was seventh as a true freshman in the 100-yard butterfly. Hayes, competing at age 18, had become internationally known when his 200-yard butterfly time surpassed Michael Phelps’s record held for 17 years in the 17-18 age group. Hayes finished the freshman campaign with honors, and lots of them: First Team All America (100 Fly Individually/ 200 Freestyle Relay), 2022 NCAA Honorable Mention All America (200 Fly Individually), 2022 ACC Male Freshman Swimmer of the Year. Aiden helped his team to become 2022 ACC Men’s Swimming & Diving Team Champions.

The family atmosphere of NC State, in combination with what Hayes describes as 1st class facilities, has boosted Hayes’ love for the sport. In a blasting comeback, his performances were a highlight reel of gold medal performances all to the crowd’s delight. At times, the crowd was in awe at the quick nature of the rejuvenated Hayes; some called him “the barracuda” because of his relentless chase for the win.

A Homecoming To Remember

This weekend’s competition was a homecoming of sorts for the nation’s top overall recruit in the 2021 class and he certainly showed off his new skills to the home crowd’s delight. Norman is roughly 460 miles from Columbia, barring you don’t miss the exit while traveling and end up in Kansas City, but home is where the heart is, and the Hayes family was in full attendance. Aiden trained and competed in the swimming pool for much of his life, since age 11. Aiden grew up hearing of his father and uncle competing at a high level at Stillwater High school in 1990’s. Their victories and his parents’ encouragement helped shape his desire to compete. His mom and dad signed him up as a kid, but he really took to the sport at 12 years old according to his dad Ben; when he started swimming with his long-time coach, Kent Nicholson. 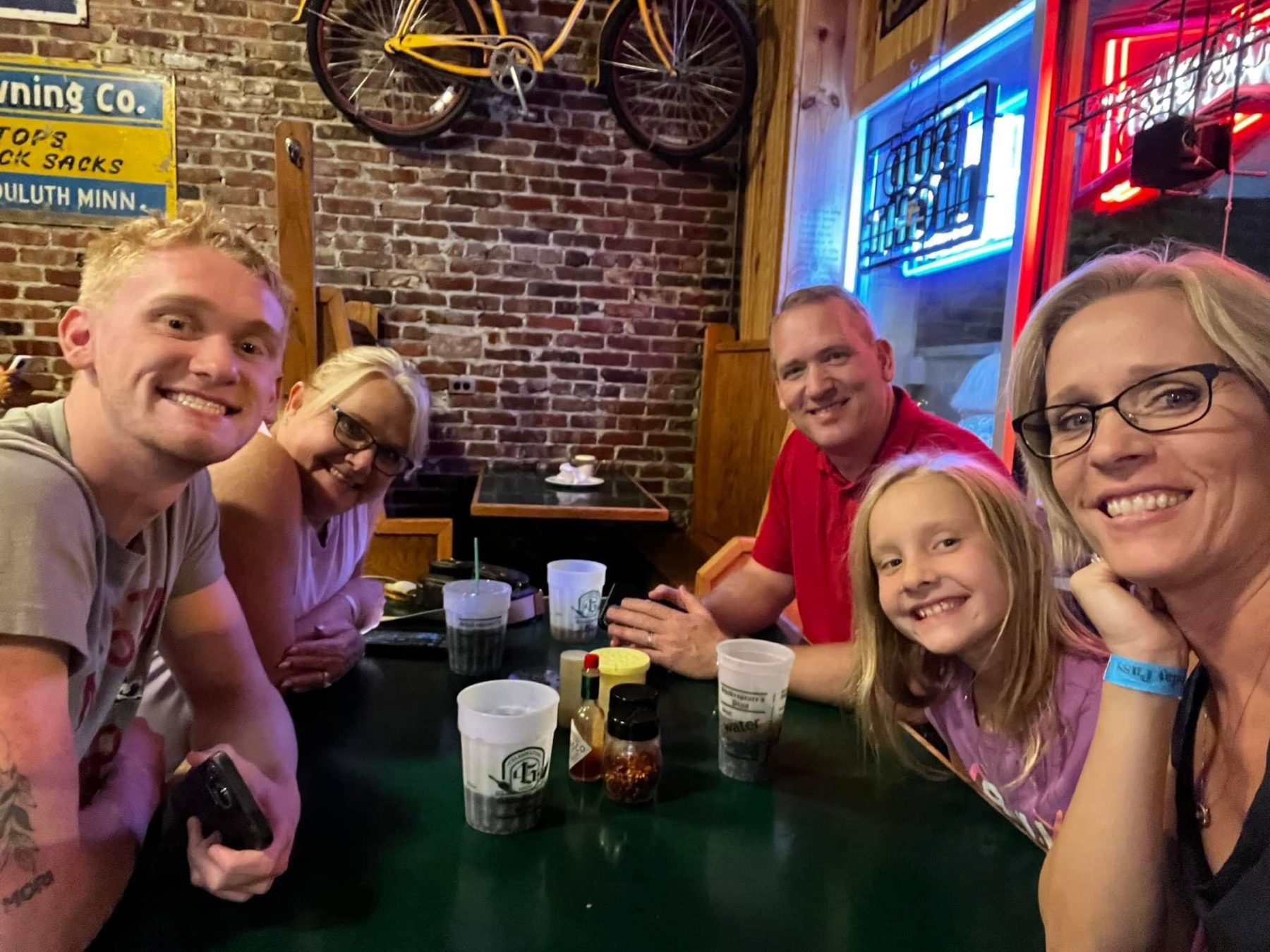 With coaching legend Nicholson by his side, Aiden Hayes today was representing Sooner Swim Club, a non-profit swim team (est.1963) based out of Haye’s hometown of Norman, Oklahoma. Nicholson is still the head coach for the Club today. Hayes began swimming with the Club, under Nicholson’s guidance, when he was 11 years old. While his summer training took place at the world-class facilities of NC State, Nicholson’s familiar face and guidance continues. It was Nicholson’s culture that Hayes was looking to recreate in Raleigh. In the recruiting process, Hayes said he “was looking for a little bit of home that I could find somewhere else. I definitely found that in his [Braden Holloway] coaching and that group of people,” with Hayes comparing the coaching style to that of Nicholson’s.

Aiden Hayes is making a splash, one more comparable to Michael Phelps, than a sharp-toothed barracuda. Make no doubt about his efforts, Hayes is on his way to being the most decorated Oklahoman in swimming history. He has now trained and competed at the highest levels of elite swimming outside of the World Championships or the Olympics, he has broken age group records and has the support to claim an unrivaled career.  However, to become the best American swimmer of all time Hayes will have to work through the victories and the setbacks he faces along the way. He’s doing just that and more.

The homecoming excitement originates from the improvements Hayes has made following a bout with pneumonia and a shoulder injury last year that kept him from competing at his top level. Two days after the NCAA Championships, Hayes decided to take some time to rest after his first grueling NCAA season.

Managing the effects the injury had on his swim times and making adjustments to a new NCAA life was a must for the budding star. The impacts of setbacks were obvious in his training times in 2021, although he admits his body didn’t return to normal until early January of 2022. During those struggles, time was given to reflect on himself, his ability to overcome and how to help his colleagues in competitive swimming.

With all of that behind him, winning was the goal for Hayes this weekend, showing up for friends and family, Hayes had one of the more impressive performances of his career with personal bests:

Aiden Hayes was also named one of the Dylan Lynn Performance of the Meet winners for the Sectional Championships along with Tayde Sansores De la Funtes from the Univ of Arkansas.

When asked if there was a preferred swimming event to participate in, Hayes stated “the butterfly and backstroke and then I just try and diversify as much as possible.”

That swim is the 7th fastest by a US Citizen this year and the 23rd fastest swim ever by an American.

The Focus Moves To Fun, School, And NCAA Competition

Downtime and watching others compete back in North Carolina may be on the agenda for the Olympic hopeful. Aiden grew up supporting local sports teams and playing sports most Oklahoma kids played until around age 11. He never lost his love of football and still supports Baker Mayfield, Oklahoma’s favorite quarterback. When asked to identify his favorite pro sports team, Hayes said “I have to go with the Panthers, especially with Baker Mayfield, you know, coming along, North Carolina-Oklahoma collaboration. I’m hopping on that bandwagon.”

As the summer swim season closes out for Hayes, his focus moves towards his education, majoring in psychology, and continued preparation for the grueling Atlantic Coast Conference Season. As he verified on Saturday, the adjustment and support offered through his NCAA competition experience have been good for his Olympic aspirations. The inherent, extraordinary pressure to perform at a high level, the extra time to grow as a person, and the learned dedication to caring for his overall health as a professional athlete are all in step with the skills needed to be on the next Wheaties box. It may take a psychology degree to make it through the grueling ACC 2022 swim season.

“After this weekend, I’ll pretty much be done for the summer. I’m going to go back and just kind of stay in shape. And then, in early August, basically from August to March is just straight away to NCAA’s.”

Hayes now ranks seventh in the United States in the Fly event this year behind Caeleb Dressel, Shaine Casas, Michael Andrew, Trenton Julian, Dare Rose and his well-known competitor from the University of Georgia, Gianluca Urlando. Hayes was asked if there was any one competitor he has already faced that he looked forward to competing against again. Hayes said “probably a swimmer from the University of Georgia named Gianluca Urlando. He’s someone I grew up racing against in the midwest. He just recently got back from World Championships. I’ve always been just kind of one step behind him. Basically, throughout the years, he’s a year ahead of me in eligibility and I think one year in age too, but I’ve always had the opportunity to race him from time to time and he always humbles me very, very much. So I enjoy racing him.”

When asked if he has signed a Name Image and Likeness (NIL) deal yet, “No, not yet. We’ve kind of been holding that off for a little bit. I had some opportunities here and there, but especially freshman year, with everything that was going on, it was such a big adjustment and it was kind of the last thing on my list.”

Next summer is a pretty big selection for the World Championship, then the summer after that is the Olympic selection. Hayes already has his sites set on a bigger, long-term accomplishment, “We were working towards that this past summer, and I had just missed out on what I needed to go and, you know, had some health issues going along the way….I’m really excited to get after it.”